I'm full of plans for a new gown, based on a series of illuminations in the Taymouth Hours, a manuscript from early 14th century England. The illuminations that caught my eye feature a series of noblewomen hunting with everything from dogs to nets to bows to hawks. In the main manuscript, these illuminations start around page 68.

In these four close ups, you can see the gist of the style. There's a long, tight sleeved gown, with a shorter, split sided, tippeted (if it's not a word, it should be) overdress. Several of the ladies have fur lining in the overgown, and several wear veils. One has a hood folded and set aside on a hawk's perch. 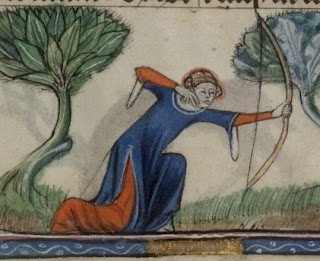 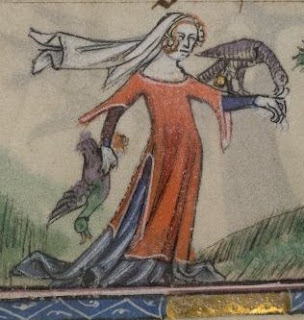 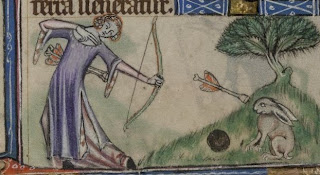 The expression on the rabbit's face in that last one cracks me up every time...

Planning for this gown is underway - I've got some lovely linen in a gorgeous mid blue, and a fantastic brick red, though I'm still deciding between a blue over red color scheme, or red over blue. The current tangle is figuring out construction and fit of both dresses. The overdress seems fairly loose and flowing all over, but it looks to me like the bodice of the undergown would be fairly close fitting, with very tight fitting sleeves.

Blocking out a general pattern is next, and then the fun of a more exact draft. My goal is to have this dress completed by Crown List in May, which is incredibly ambitious between my field work for my degree, and wedding planning (June 18th can't get here soon enough!). We'll see how much I can get done, though!
Posted by Anne Fitzjohn at 7:15 PM 2 comments:

I seriously needed some warmer garb for Diamond Wars and further events this winter, so ordered some wool army blankets (for CHEAP) from a seller on Ebay.  They weren't in the best condition, but were definitely workable at 60" by 80".  I dyed one maroon, and the other charcoal gray using RIT dye, since they were a rather spectacular shade of cat-sick-khaki.

Since the maroon blanket had several very very worn spots, I decided to leave that one for a cloak, and use the charcoal blanket for the dress.  I relocated to my boyfriend's house for the cutting in order to avoid the cats trying to take over the fabric.  For future reference, dogs are almost as obnoxious as cats.  At least Rosie listens to "MOVE."

Fabric cut into a skirt portion and a bodice portion.

I like to draft directly onto the fabric, for several reasons.  First, I like to see where I'm going to be cutting.  Second, I don't have any paper big enough!  Finally, I'm lazy, and it saves me a step.  For this bodice, I sort of Frankenstein-ed drafting instructions from Drea Leed and The Tudor Costume Page.  I like Drea's more precise instructions (and the pattern generators!!) but the Tudor Costume Page has a lot more information focused on lower class outfits.  The fabric has been folded in half, and there's plenty of room to cut sleeves as well.

The bodice cut out and pieced together.

Sewn and quickly pinned shut to get an idea of fit. (Bonus basement cat!)  The wrinkling in the bodice was taken care of by the weight of the skirt once it was all put together.

The lining is a brown linen that I had leftover from my viking outfit.  It had to be rather creatively cut, but I made it work.

Quick action shot of my beloved Singer - this was my mom's machine and sewing cabinet that she bought in the 70's.  For my birthday last year, she had it fixed up for me, and it runs beautifully.

The skirt pieced together.  In order to get a little more fullness since I was working with VERY limited fabric, I cut the skirt as several trapezoids.  I then matched them bias edge to straight edge to avoid any craziness of the seams, and sewed them together.  The end result had enough extra room for a box pleat in the back, and was wide enough so that I could actually walk.

Unfortunately, I didn't get any action shots at Diamond Wars.  All three of us managed to forget our cameras!  I'll make a post soon with full outfit shots (dress, coif, apron and all) as soon as I can get Matt to play photographer.  Here's a couple of bathroom mirror shots just to show fit - the smock was finished later (with epic struggles...).

The front - the odd gap in front will be covered by the apron.  It's there so that I can actually get into the dress.  I added a guard around the bottom of the dress in the maroon fabric later as well.  With more careful lacing, the bodice looks much smoother as well.

And the back - you can see my wee box pleat.

Posted by Anne Fitzjohn at 10:54 AM No comments: